Omega Dark Side of the Moon watches 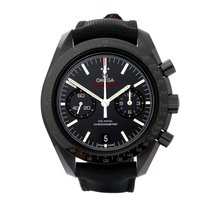 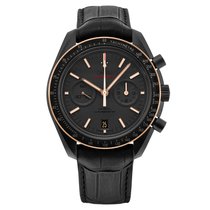 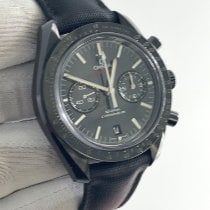 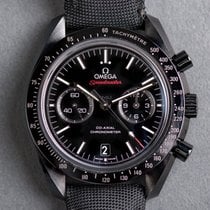 The Safest Path to Your Dream Watch

Omega Speedmaster: Dark Side of the Moon in Ceramic

With its ceramic case and Co-Axial caliber, the Speedmaster Dark Side of the Moon is a high-tech mechanical watch. State-of-the-art movements guarantee exceptional, chronometer-level accuracy. Its trendy look is inspired by the Moon's far side.

The Swiss manufacturer Omega first presented the Dark Side of the Moon at Baselworld 2013. It is a modern interpretation of the famous Speedmaster Professional, the first watch to reach the Moon. Since then, it has evolved into its own collection with many different models. The design of the Dark Side series is very similar to that of the original Moonwatch, but it forges its own path in terms of materials and technology.

One of the key distinctions is the case size. With a diameter of 44.25 mm, the Dark Side is 2 mm larger than the traditional Moonwatch. The case material is different, too. Instead of stainless steel, Omega uses black ceramic for the Dark Side. The manufacturer also crafts the dial from this hard, scratch-resistant material.

The automatic Omega Co-Axial caliber 9300 powers Dark Side watches. Unlike the classic manual 1861 movement, which you can find in the Speedmaster Professional, the 9300 features a date display at 6 o'clock. The Speedmaster Professional has two separate subdials for its minute and hour counters, while the Dark Side relies on a more unique approach: It features just one subdial with two hands for both the minutes and hours at 3 o'clock.

Reasons to Buy the Dark Side of the Moon

Prices at a Glance: Omega Dark Side of the Moon

How Much Does an Omega Dark Side of the Moon Cost?

Prices for mint-condition Dark Side of the Moon watches range from 9,200 to 19,200 USD. On the upper end of that price range, you'll find editions generously studded with diamonds.

Each model combines the looks of the classic Speedmaster Professional from the 1960s with innovative technology, such as a ceramic case and Co-Axial caliber. Black dominates this series' color palette. If you're looking for a functional chronograph, the Dark Side of the Moon is a good option.

You can choose between different versions of the Dark Side. The Pitch Black ref. 311.92.44.51.01.004 is almost entirely black, except for the dial's light green numerals, indices, and inscriptions, which are made of the luminous material SuperLuminova.

The Black Black ref. 311.92.44.51.01.005 is solid black. While it scores plenty of style points, its black luminous material is difficult to read under poor lighting conditions. If that's important to you, you'll probably prefer some of the other models like the Sedna Black ref. 311.63.44.51.06.001. It pops thanks to its Sedna gold hands, indices, date, and bezel edge. Sedna gold is Omega's proprietary rose gold alloy. The Vintage Black ref. 311.92.44.51.01.006 is black except for its tan indices and numerals. It also features a brown leather strap, which underscores this watch's charming retro feel.

The price for a Speedmaster Dark Side of the Moon Black Black sits around 9,800 USD in mint condition and 8,800 USD used. The Sedna Black costs a solid 11,500 USD new and about 9,300 USD pre-owned. Plan to spend around 9,500 USD on a never-worn Vintage Black. The same timepiece sells for roughly 8,200 USD pre-owned.

The Speedmaster Dark Side of the Moon with diamonds is by far the most expensive chronograph in this series. Numerous diamonds adorn this black ceramic timepiece's bezel and serve as its hour indices. You can find this edition under the reference number 311.98.44.51.001. Be prepared to spend about 19,200 USD for a never-worn timepiece. Used watches remain a rare sight on Chrono24.

Grey, White, and Blue Side of the Moon

Omega also produces some light-colored ceramic watches known as the "Grey Side of the Moon" and "White Side of the Moon." The former features a gray case inspired by the color of moondust. As astronaut Jim Lovell put it: "The Moon is essentially gray." This watch with a Co-Axial caliber and chronograph function is available with either a sandblasted platinum dial or a "meteorite" dial made from slices of the Gibeon meteorite. Each of these dials has a unique pattern, making every Grey Side of the Moon "Meteorite" truly one of a kind. This is all topped off by Sedna gold hands and indices, as well as a ceramic bezel with a Sedna gold tachymeter scale and edge.

If you are interested in the Omega Speedmaster Grey Side of the Moon with a platinum dial, you will need around 9,500 USD for a new timepiece and 7,900 USD for a pre-owned one. The Grey Side of the Moon "Meteorite" demands about 12,000 USD in mint condition and 9,900 USD used. With list prices of 14,500 and 16,700 USD, respectively, you can save several thousand dollars by purchasing your watch on Chrono24.

The Omega Speedmaster White Side of the Moon is solid white and inspired by the Moon's radiance as viewed from Earth. Two small splashes of color on this chronograph include the red tip of the stopwatch second hand and the red "Speedmaster" inscription. As a whole, the design of this ceramic watch feels a bit more feminine. Hands and indices in 18-karat gold add value to this 44.25-mm timepiece. The version with a mother-of-pearl dial and diamond-studded bezel is especially elegant. This model also features gold indices embellished with diamonds. White leather straps underscore the clean look of this series.

The version with diamonds and a mother-of-pearl dial has a list price of 27,400 USD. You can find the same watch new on Chrono24 for around 19,700 USD. Pre-owned pieces are still quite rare. The variant without diamonds is much more affordable at 9,500 USD in mint condition and about 7,700 USD used. Both prices are well below its recommended retail price of 13,800 USD.

The Speedmaster Professional Blue Side of the Moon (ref. 304.93.44.52.03.001) pays tribute to the night sky. The Co-Axial caliber 9904 provides this timepiece with a beautiful moon phase display at 6 o'clock. The case measures 42.25 mm in diameter and is made of ceramic. Indices in 18-karat white gold sit atop the blue ceramic dial. Omega creates the blue tachymeter scale using their proprietary Liquidmetal alloy, which also contains ceramic.

Inspired by the Far Side of the Moon

The name of this series has many interpretations. Omega dedicated the Dark Side of the Moon to the astronauts of the Apollo program. The Apollo 8 mission in December 1968 played a particularly special role in the naming of the series, as it marked the first time that humans had ever seen the far side of the Moon with their own eyes. Given that the same side of the Moon is always facing Earth, this sight only became possible thanks to space travel. This is because the amount of time it takes the Moon to make one full rotation on its axis is identical to the time it takes to complete one orbit of the Earth. Scientists refer to this phenomenon as tidal locking.

The crew of Apollo 8 hadn't truly uncovered new territory, however, as the Soviet space probe, Luna 3, had already photographed the dark side of the Moon in 1959. Furthermore, the Moon's far side isn't truly dark; it also receives sunlight.

The phrase "dark side of the Moon" doesn't just refer to space, either. Mark Twain used it as a metaphor for the dark side of man, and music lovers know it as the name of the popular 1973 album by the British band Pink Floyd.

Omega leaves the door open to interpretation with "Dark Side of the Moon." The watch has many qualities in common with the Speedmaster Professional, the official timepiece of the Apollo program. Both are chronographs and have fixed bezels with tachymeter scales, as well as small seconds subdials at 9 o'clock. Two push-pieces control the chronograph functions: starting, stopping, and resetting to zero. Furthermore, both models are water-resistant to 50 m (50 bar, 164 ft).

Cordura Straps and the Co-Axial Caliber 9300

Omega pairs the base model of the Dark Side of the Moon and the Black Black edition with a black Cordura strap. This synthetic material is more tear-resistant than nylon, which is why you'll often find it used for belts, bags, and protective clothing for motorcyclists. The Pitch Black, Sedna Black, and diamond version all feature a black leather strap.

The display case back gives you a clear view of Omega's own caliber 9300. This movement has a 60-hour power reserve thanks to its two barrels. It also boasts high shock resistance and low friction as a result of its co-axial escapement. Furthermore, Omega chose to use a silicon balance spring to keep the watch unaffected by magnetism.