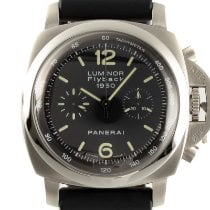 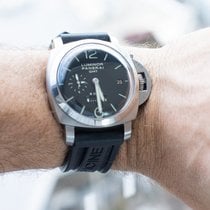 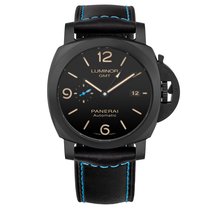 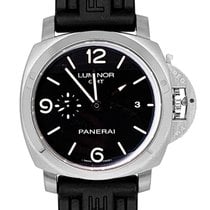 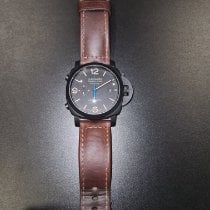 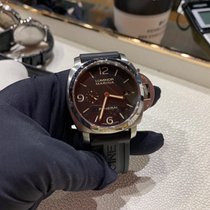 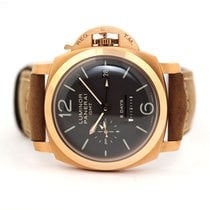 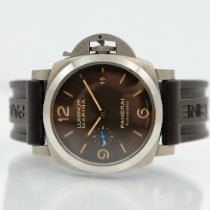 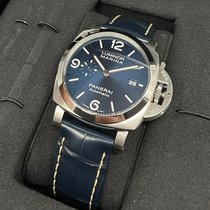 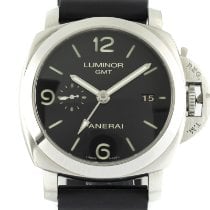 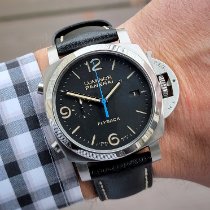 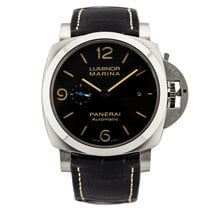 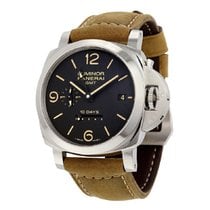 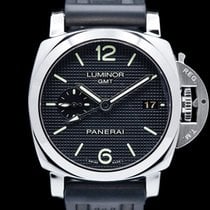 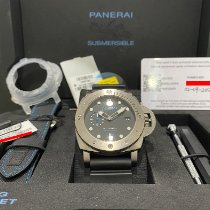 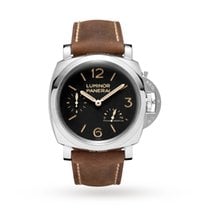 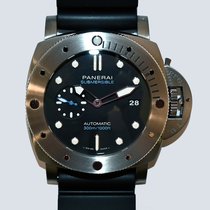 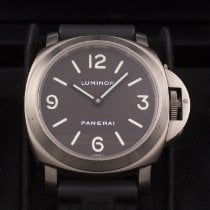 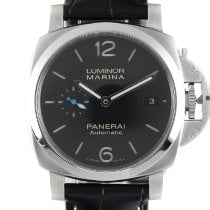 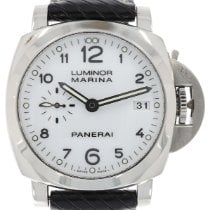 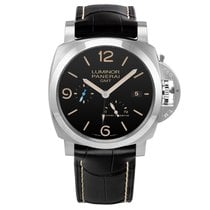 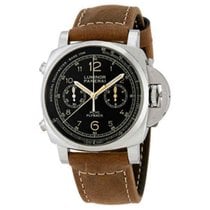 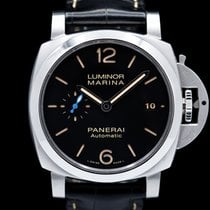 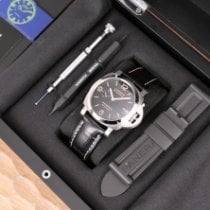 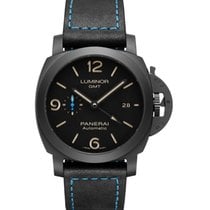 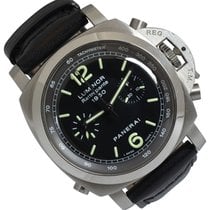 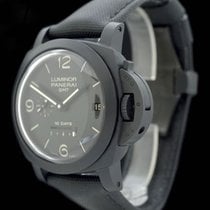 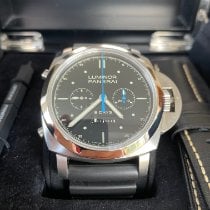 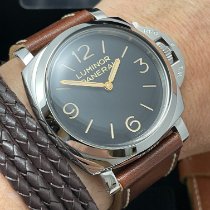 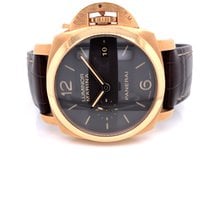 The Luminor 1950 pays tribute to the military watches Panerai produced for the Italian navy in the 1950s. Top models feature complications like a flyback chronograph, GMT function, or tourbillon.

A Modern Take on Iconic Watches

Panerai set the standard for modern military watches with the release of the Luminor in the early 1950s. Like the watches in the Radiomir collection, these timepieces are some of the most innovative creations to come from this Italian manufacturer.

One of the easiest ways to tell Luminor watches apart from the Radiomir is the presence of a prominent crown-protecting bridge engraved with the letters "REG. T.M." for "registered trademark" on the latter. Standard Luminor models also feature this type of crown guard but without any engraving. In both instances, this unique feature pushes the crown firmly into the case, preventing any water from getting inside and damaging the delicate mechanics.

Within the Luminor collection itself, you can tell whether you're looking at a standard edition or 1950 model by the shape of the case sides. While the classic Luminor has straight lines running the full length of the case, the sides of the Luminor 1950 curve as they approach the lugs. This results in a slightly more elegant timepiece. Luminor 1950 watches range from 42 to 50 mm in diameter. The ref. PAM01392 occupies the lower end of the spectrum. At 42 mm in diameter, it makes a fantastic unisex watch. For something a bit more striking, there's also the 47-mm ref. PAM00767 with a tourbillon.

Panerai crafts many Luminor 1950 models out of classic metals like stainless steel, gold, bronze, or titanium. However, some editions come in state-of-the-art materials like ceramic or Carbotech, a carbon fiber composite. For example, the case of the Luminor Submersible 1950 ref. PAM00616 is made entirely of this high-tech material.

How much does the Panerai Luminor 1950 cost?

The ref. PAM00372 is the Luminor 1950 model for watch purists. Its design is heavily influenced by watches from the 1950s. The polished stainless steel case is 47 mm in diameter and water-resistant to 100 m (10 bar, 328 ft). Two overlapping discs combine to form the dial. The upper disc is black and features cut-out hour indices, including Arabic numerals at 3, 6, 9, and 12 o'clock. The lower disc is coated in SuperLuminova, which shines through the holes in the upper disc. This type of dial is known as a "sandwich" dial.

The manual caliber P.3000 powers this two-hand watch and boasts a power reserve of 72 hours. A dark brown leather strap with white stitching holds the final timepiece securely on the wrist. Plan to spend around 6,500 USD on a pre-owned example. If you prefer new timepieces, be sure to have about 7,200 USD on hand.

A Flyback Chronograph and Regatta Timer

The Luminor collection contains a selection of chronographs. One of the most exciting examples is the ref. PAM00526, also known as the 1950 Regatta 3 Days Chrono Flyback Automatic Titanio . This timepiece goes above and beyond your average flyback chronograph. Panerai introduced the 47-mm titanium watch in 2013. It is water-resistant to 100 m (10 bar, 328 ft) and boasts a regatta countdown function.

All this functionality comes from the in-house caliber P.9100/R with a 3-day power reserve. You can view this movement at work through the sapphire glass case back. This watch comes on a rubber strap and costs roughly 14,000 USD new and 13,000 USD pre-owned.

How much does the Panerai Luminor 1950 GMT cost?

The Luminor 1950 with a GMT function is the perfect choice for frequent travelers. The 3 Days Automatic Acciaio, ref. PAM00320, has a 44-mm polished stainless steel case and the in-house caliber P.9000 with a 72-hour power reserve. This watch features a small seconds at 9 and a date display at 3 o'clock in addition to its GMT function. Panerai produced this model from 2009 to 2016. Collectors should take particular notice of this timepiece, as it may increase in value in the future. You can purchase a pre-owned piece on a leather strap for around 5,800 USD. Mint-condition models demand about 6,800 USD.

The ref. PAM00535 is a 42-mm stainless steel watch. A sapphire glass case back offers a view of the in-house caliber P.9001 within. This movement boasts a 3-day power reserve and provides this timepiece with its hour and minute hands, GMT function, small seconds at 9 o'clock, and date display at 3. The black guilloché dial has line indices, as well as Arabic numerals at 6 and 12 o'clock. Panerai mounts this watch on a dark brown leather strap with white stitching. Prices for this timepiece sit between 5,700 and 7,100 USD, depending on its condition.

If you like rose gold watches, the ref. PAM00576 is right for you. Its polished 44-mm case is water resistant to 50 m (5 bar, 164 ft) and houses the manual caliber P.2002. Panerai outfits this movement with three barrels, which gives it an astonishing 8-day power reserve. The brown dial features line indicies, Arabic numerals at 6 and 12 o'clock, a GMT display, and a power reserve indicator. There's also a date display at 3 and a small seconds at 9 o'clock. An AM/PM indicator sits within the small seconds dial. Never-worn examples change hands for approximately 23,000 USD, while pre-owned pieces cost about 20,500 USD.

Prices for the Luminor Submersible 1950 Carbotech

Panerai introduced the Luminor Submersible 1950 Carbotech 3 Days Automatic with the reference number PAM00616 in 2015. This 47-mm timepiece was the first watch made of Carbotech, a matte black carbon fiber composite. The process of compressing the layers of carbon fiber results in a unique shadow pattern, meaning no two Carbotech watches will ever be exactly the same. The rotatable bezel is also made of this high-tech material.

Thanks to its screw-down case back, the Carbotech 3 Days is water-resistant to 300 m (30 bar, 984 ft). The automatic in-house caliber P.9000 ticks away inside this timepiece. The movement has a 3-day power reserve and provides power to the hour and minute hands and the small seconds at 9 o'clock. This model comes on a black rubber strap and sells for around 14,000 USD new and 13,000 USD pre-owned.

The ref. PAM00767 is the highlight of the Luminor 1950 series. Panerai announced this eye-catching 47-mm titanium timepiece in 2018. The caliber P.2005/T powers this tourbillon watch. The manual movement is the first Panerai tourbillon caliber made of titanium. Its bridges and plates are all skeletonized so as not to obstruct your view of the movement at work. Three barrels combine for a massive 6-day power reserve.

The dial, if you can even call it that, consists of four Arabic numerals at 3, 6, 9, and 12 o'clock and line indices. There are two central hands for the hour and minutes, as well as a smalls seconds dial at 9 and a dual GMT and AM/PM display at 3. The PAM00767 is limited to a run of 100 pieces and comes on a black leather strap. You can find this timepiece on Chrono24 for around 121,000 USD in mint condition. The same watch has a list price of 143,000 USD on Panerai's website.

Prices for the Coveted Bronze Submersible

Luminor Submersible Bronzo models are in high demand among collectors. All three debuted between 2011 and 2017. A fourth Bronzo watch, the PAM00968, was released in 2019. However, it belongs to the newly independent Submersible collection. Regardless of the collection, each Bronzo model has a 47-mm case and is water-resistant to 300 m (30 bar, 984 ft). However, the three original Luminor Submersible Bronzo watches all had limited production runs of 1,000 pieces and feature different in-house calibers, displays, and dial designs.

The first Bronzo, the ref. PAM00382, contains the in-house caliber P.9000. This movement has central hands for the hours and minutes, a small seconds at 9 o'clock, and a date display at 3. Prices for a pre-owned piece sit around 26,000 USD, while new watches cost only slightly more at about 27,000 USD.

Panerai released a second Submersible Bronzo model in 2013: the ref. PAM00507. It comes with the caliber P.9002 and is identical to its predecessor except for its power reserve indicator. Regardless of its condition, this watch sells for roughly 26,500 USD.

The final Luminor Submersible Bronzo, the PAM00671, debuted in 2017. Panerai outfits this model with the caliber P.9010. This movement packs all the features of the P.9002 into a more compact design. A brown leather strap with white stitching keeps this watch on the wrist. You can call a never-worn example your own for around 26,000 USD. Pre-owned pieces require an investment of about 25,500 USD.

The Luminor collection gets its name from the tritium-based luminous material Panerai had patented in 1949. Before then, they had been using Radiomir, a radioactive substance based on radium. Panerai later introduced their distinctive crown-protecting bezel in 1950. From a design perspective, very little has changed about these military watches over the years.

Most Luminor 1950 watches are on the larger side. Perhaps unsurprisingly, they also have a large following among many of Hollywood's leading men. For example, Sylvester Stallone is the proud owner of a Luminor 1950. He can be spotted wearing Panerai watches both on and off the silver screen. He began wearing these timepieces on camera while filming Daylight (1996). Stallone had purchased his own Luminor and decided to wear it in the movie. This led to a collaboration with Panerai on the limited edition Luminor Submersible Slytech with the reference number PAM00202 .

He later wore a Luminor 1950 Regatta Rattrapante ref. PAM 322 in the action film The Expendables (2010). Arnold Schwarzenegger is a fellow Panerai devotee. Perhaps best known as the Terminator and the former governor of California, Schwarzenegger wore a Luminor Marina in his portrayal of U.S. Marshal John Kruger in 1996's Eraser.