Looking to sell a watch? Select how:

Over 1,500 successful private sellers each month.

Become a Chrono24 dealer
Free Appraisal
What is your watch worth?
Home Patek Philippe watches Sky Moon Tourbillon
5 results for " 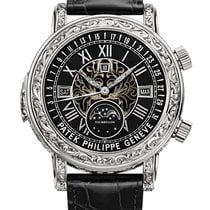 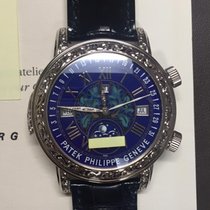 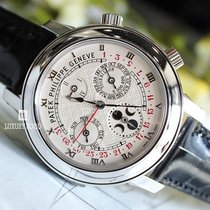 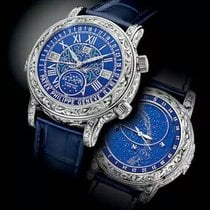 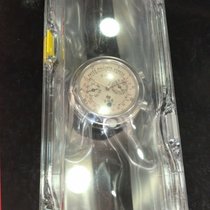 CN
Save this search

The Sky Moon Tourbillon is one of Patek Philippe's most intricate wristwatches and their first to have two faces. It houses 12 impressive complications, including a perpetual calendar, minute repeater, and a depiction of the night sky.

The Best of Haute Horlogerie

The Patek Philippe Sky Moon Tourbillon—complete with 12 complications—demonstrates the highest level of watchmaking artistry. Its functions include a perpetual calendar, retrograde pointer date, leap year display, moon phase display, and minute repeater. Flip over this intricately engraved luxury watch and you will find astronomical displays such as sidereal time, a star chart, and the phases and orbit of the Moon. What's more, concealed inside is a tourbillon, which is responsible for this timepiece's outstanding accuracy.

Patek Philippe first presented the Sky Moon Tourbillon in 2001. The timepiece with reference number 5002 was, at the time, the Swiss manufacturer's most complicated wristwatch. It was also the first double-faced watch produced by Patek Philippe. The dial side displays the time, date, day, month, as well as the leap year cycles and age of the Moon. The moon phase complication displays how many days have passed since the last full moon, and the date is displayed via a central hand.

In 2013, Patek Philippe introduced the next version of the Sky Moon Tourbillon, a watch with reference number 6002 . Like its predecessor, this watch has 12 complications. From a technological perspective, the 6002 and 5002 are almost identical. The new model, however, features an intricately decorated white gold case and a beautiful enamel dial. Both the 5002 and the 6002 belong to Patek Philippe's Grand Complications collection.

How much does a Sky Moon Tourbillon cost?

If you want to call one of Patek Philippe's most intricate timepieces your own, the Sky Moon Tourbillon is the watch for you. Models with reference number 5002 cost around 1.5 million USD new. In terms of case material, you can choose between platinum, rose gold, or white gold.

Watches with the reference number 6002 sell for around 1.75 million USD. This timepiece has an ornately engraved white gold case and a black or blue dial with a matching strap.

With 20 complications, the Grandmaster Chime is even more complex than the Sky Moon Tourbillon. It features a grande and petite sonnerie, minute repeater, and alarm, as well as multiple power reserve displays, a perpetual calendar, and a second time zone. Set aside around 3.5 million USD for a never-worn model.

How much do watches in the Grand Complications collection cost?

If a perpetual calendar alone is enough for you, you can purchase a mint-condition Patek Philippe ref. 5327 from the Grand Complications collection for about 69,800 USD. Pre-owned pieces sell for around 64,000 USD. Its case is available in yellow, white, or rose gold.

Mint-condition platinum Patek Philippe watches with minute repeaters, such as the ref. 5078, change hands for about 352,000 USD. You can save a few thousand dollars by purchasing a pre-owned timepiece. The Genevan luxury brand also produces watches that combine a perpetual calendar with a minute repeater. For example, the reference number 5374 in platinum demands around 617,000 USD new.

Celestial models with the reference number 5102 or 6102 are certainly a sight to behold. On the front side, these watches display the night sky as well as the phases and orbit of the Moon. Prices for white gold examples range from 200,000 USD pre-owned to 215,000 USD new. The rose gold edition of the Celestial ref. 6102 costs around 233,000 USD. At 258,000 USD, the platinum version is a bit more expensive. The most expensive version has a diamond-studded bezel and costs about 349,000 USD.

When Patek Philippe introduced the Sky Moon Tourbillon with reference number 5002, it was the Geneva-based manufacturer's most complicated watch to date. The watch contained a tourbillon to help it run more accurately. Abraham-Louis Breguet invented this mechanism toward the end of the 18th century. At that time, men usually carried their pocket watches vertically in their vest pockets. This position led to gravity-related deviations from the correct time. Therefore, Breguet put the oscillation and escapement systems in a rotating cage. The cage completed a full rotation every 60 seconds, counteracting any deviations in time. Aside from Patek Philippe, manufacturers like A. Lange & Söhne, Blancpain, and Breguet use tourbillons in their classic watches.

The Sky Moon Tourbillon has a total of 12 complications and a double-faced display. The front side displays the time as a watch usually does. It also features a perpetual calendar, which indicates the date with a central hand that points to numerals on the dial edge. The day display is located on a subdial at 9 o'clock, while the month subdial is located at 3 o'clock. The age of the moon is displayed at 6 o'clock; this shows how many days have passed since the last full moon. The leap year display is located at 12 o'clock.

If you turn the watch over, you'll see a detailed depiction of the night sky. You can easily see the Milky Way, our solar system's galaxy. The Moon is also featured in miniature form. Patek Philippe put the moon phase and orbit display on the back side of the watch. The meridian passages of Sirius and the Moon are displayed as well. There are also two hands indicating sidereal time, which is about four minutes shorter than solar time and is used as an astronomical time scale. A sidereal day is equal to the amount of time it takes the Earth to make one rotation relative to the vernal equinox.

The case of the 42.8-mm Sky Moon Tourbillon is made of platinum or white, yellow, or rose gold . Its manual caliber R TO PS QR SID LU CL consists of 686 components.

In 2013, Patek Philippe introduced a new, reworked version of the Sky Moon Tourbillon. This model bears the reference number 6002. The same manual caliber powers both models, thus the 6002 also features 12 complications. However, Patek Philippe made a few changes to the displays. The perpetual calendar changed from a subdial to a window display. The day display is at 9 o'clock, the month at 3 o'clock, and the leap year cycle at 12 o'clock. A moon phase display has replaced the moon age display at 6 o'clock on the newer model. However, the retrograde date display on the front side and the astronomical complications on the back side remain the same.

Highlights of the Patek Philippe Sky Moon Tourbillon with reference number 6002 include its enamel dial and intricately hand-engraved white gold case. You can easily recognize the ornamentation, arabesques, and elements of the Calatrava cross, which has been the logo of Patek Philippe since 1887. Originally, this cross fleury was the emblem of the Spanish Order of Calatrava. St. Raymond of Fitero founded the order in 1158 to defend the castle of Calatrava from the Moors. In 1932, Patek Philippe named a watch after the order: the Calatrava.

The intricate engravings on the Sky Moon Tourbillon require over 100 hours of work. Afterward, the president of Patek Philippe personally inspects the quality of the engravings. Even the slide for the minute repeater has artistic engravings. The decorations on both winding crowns are not only beautiful but functional as well. The crown at 4 o'clock sets the time and winds the movement; an arrow shows which direction you should turn. The second crown at 2 o'clock sets the astronomical functions on the back side. You can recognize the functions of this crown thanks to its engravings of the Moon and stars.

The enamel dial on the front side is a piece of art in itself. It combines many different enamelling techniques. The most spectacular are the champlevé and cloisonné techniques . The cloisonné technique requires watchmakers to solder thin wires or metal strips onto the metal plate to be decorated. The champlevé technique involves engraving directly into the metal, then filling it with enamel until a smooth surface appears. These intricate decorative techniques were both used to create the astounding enamel artwork on the front dial of the Sky Moon Tourbillon.

Patek Philippe chose to offer both the dial and alligator leather strap in blue or black. The hour markers are applied golden Roman numerals. The minute track resembles a railway, and the entire case is 42.8 mm in diameter.