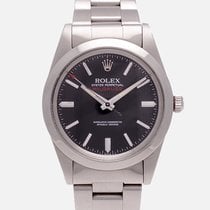 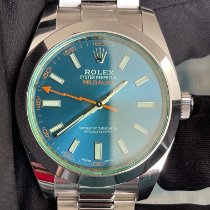 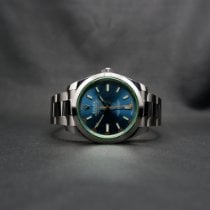 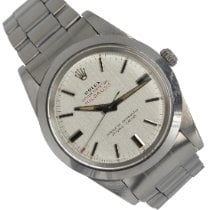 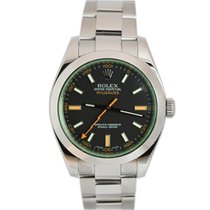 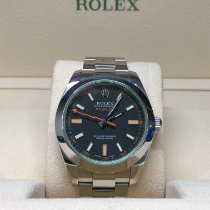 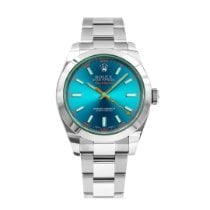 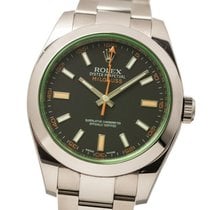 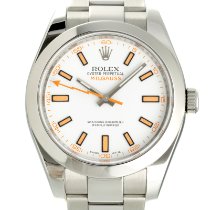 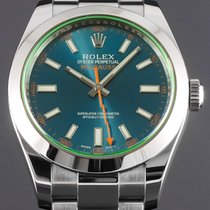 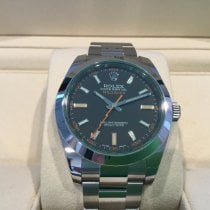 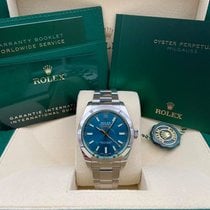 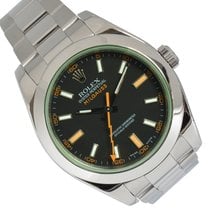 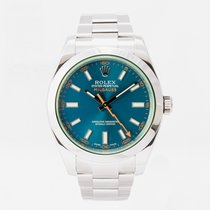 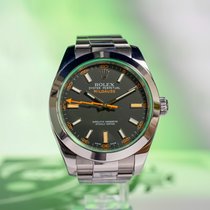 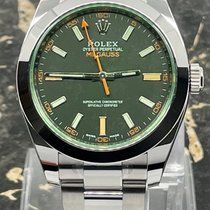 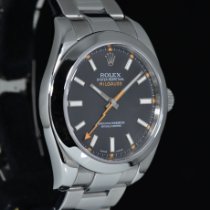 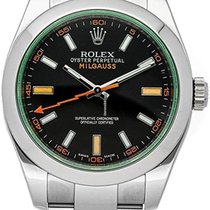 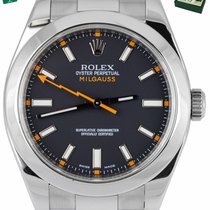 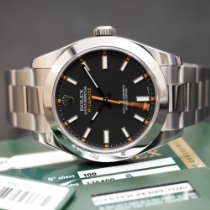 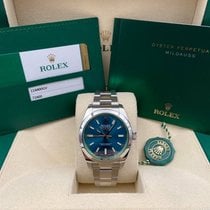 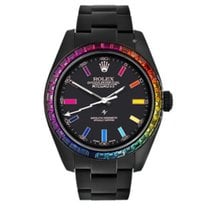 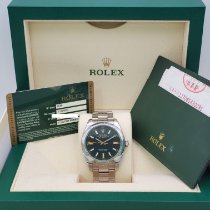 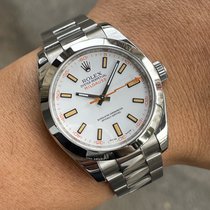 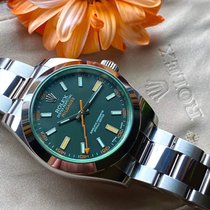 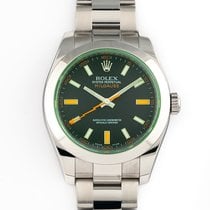 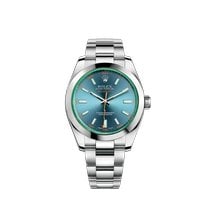 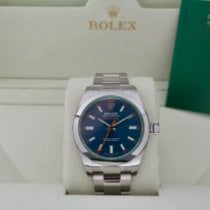 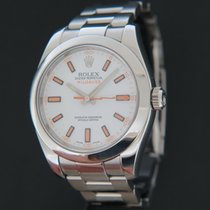 The Rolex Milgauss can withstand the strongest magnetic fields, making it the ultimate tool watch. Originally developed for engineers and scientists, today this sporty-elegant luxury watch is also a top choice for fashion-forward watch enthusiasts.

For Scientists, Businesspeople, and Recreational Athletes

The Milgauss holds a special position within the Oyster collection. It was the first Rolex watch with resistance to strong magnetic fields thanks to a shield made of ferromagnetic materials. Since its introduction in 1956, this protective shield has been guarding the Milgauss against magnetic fields of up to 1,000 gauss. This also explains the watch's name: It is a combination of the French word for thousand (mille) and the unit of measurement for magnetism "gauss."

What's more, this timepiece is water-resistant to 100 m (10 bar, 328 ft) as a result of its screw-down case back and Twinlock crown. This means the Milgauss is not only suited for scientists, who encounter strong magnetic fields in their work, but it is also a universal timepiece that you can wear while swimming or playing sports. Thanks to its sporty-elegant look, it is likewise at home in the office and serves as the daily companion of many executives and businesspeople.

Its design includes a 40-mm Oyster case and a three-piece link Oyster bracelet with polished middle links, both of which underscore the watch's elegance. There's no missing the orange, lightning-bolt-shaped second hand, nor the orange "MILGAUSS" inscription and minute scale around the edge of the dial. Green-tinted sapphire crystal is yet another defining feature of the Rolex Milgauss.

5 Reasons to Buy a Rolex Milgauss

Prices at a Glance: Rolex Milgauss

How much does a Rolex Milgauss cost?

A Rolex Milgauss with the reference number 116400GV and a Z-Blue dial costs about 9,900 USD in mint condition. Pre-owned models go for as little as 8,600 USD. The abbreviation "GV" stands for "Glace Verte" and refers to the green-tinted sapphire crystal. Prices for this wristwatch have been increasing steadily since early 2018. In January 2018, this reference demanded only 7,800 USD. Within a year, that price had risen to over 8,300 USD, and by late 2019, the Milgauss Z-Blue had passed the 9,500-USD mark. Pre-owned pieces have also performed well, with prices rising by an average of 1,200 USD between 2018 and 2020.

The version with a black dial and green sapphire crystal bears the same reference number. This watch sells for between 8,000 and 9,600 USD, depending on its condition. It has also appreciated in value over the last few years: Back in mid-2015, the same timepiece cost under 7,000 USD.

If you prefer the look of clear sapphire crystal, you should keep your eyes peeled for the ref. 116400. This model is available with a white or black dial. The latter changes hands for about 10,000 USD new and 7,300 USD pre-owned. For comparison, this timepiece cost only 7,200 USD new in early 2017. The white edition is slightly more affordable, with never-worn pieces demanding about 9,500 USD and used watches around 7,700 USD.

Fans of vintage watches should be on the lookout for the ref. 1019. Rolex manufactured this model from the early 1960s until the late 1980s. Even though it was in production for over 20 years, it is still relatively rare. The audience for the Milgauss was low at the time, leading to limited production numbers.

You can recognize that ref. 1019 by its polished bezel and straight second hand. It comes in three dial varieties: black, silver, and without luminous material. The third option is also known as the "CERN" dial since it was commissioned by the European Organization for Nuclear Research (CERN). This version is especially popular among collectors and sells for prices ranging from 26,000 to 54,500 USD. The model with a silver dial and luminous material (in this case, tritium) costs about 26,000 USD, while the black edition requires an investment of roughly 31,500 USD.

One of the earliest Milgauss models is the ref. 6541. This watch's production run lasted from 1956 until the early 1960s. Due to its rarity, it's not uncommon for this reference to sell for over 177,000 USD at auction. However, you can also find timepieces in varying used conditions for around 59,000 USD.

The 6541's predecessor, the ref. 6543, is nearly impossible to find; Rolex only ever made a handful of these watches over a very short period of time. Prices upwards of 177,000 USD are fairly standard. Thanks to their black rotatable bezels, Oyster cases, and Oyster bracelets, these early Milgauss models bear a striking resemblance to the first Rolex Submariners.

The Milgauss comes with a dial in your choice of black, white, or blue. All of the hour indices on the white dial are orange. Only 3, 6, and 9 o'clock are colored orange on the black dial (ref. 116400GV), while the rest are white. The blue dial features entirely white indices. All three versions share orange Arabic numerals on their minute tracks. The one exception is the black edition with clear sapphire crystal, whose minute scale features rectangular orange markers. Like the Z-Blue, this version also has exclusively white indices.

Perhaps the most notable feature of the Rolex Milgauss is its orange lightning bolt second hand ending in an arrow. This extra detail really stands out on the otherwise streamlined watch.

The in-house caliber 3131 powers the Milgauss. This automatic movement has a 48-hour power reserve and ticks at 28,800 vibrations per hour (4 Hz). An inner case made of a special metal alloy protects the movement against magnetic fields.

The 3131 premiered alongside the new version of the Milgauss in 2007. It features a stop-seconds mechanism, enabling you to set the time to the exact second. The 3131 is closely related to caliber 3135, which powers the Sea-Dweller with a date display. A date display would create a hole in the Milgauss movement's shield. Therefore, this feature was purposefully not included.

The Milgauss has a moderate diameter of 40 mm and is, therefore, a good companion for both narrower and larger wrists. Its case is made of 904L stainless steel. Rolex has chosen this steel alloy since it is particularly tough and non-corrosive. There's no need to fear being near water when wearing a Milgauss either, as it's water-resistant to 10 bar (100 m, 328 ft), so you can leave it on while swimming and snorkeling. Its Twinlock crown uses two rubber gaskets to keep water from seeping into the watch.

The Oyster Bracelet with Easylink

Similar to its case, the Milgauss' three-piece link bracelet also comes in 904L stainless steel. This specific bracelet type is known as the Oyster bracelet, which Rolex uses for many other models. Its middle links are polished, while the outer links have a matte finish. The bracelet can easily be extended 5 mm with the Easylink system and adjusted to fit your wrist.

The History of the Rolex Milgauss

The Milgauss stands out due to its anti-magnetic properties. A special balance spring and a soft iron cage around the movement protect the watch from any magnetic fields. It premiered in 1956 under the reference number 6541. Rolex originally designed the Milgauss for scientists and other professionals who often work near strong magnetic fields. Rolex didn't need to look very far from their own back yard: The nuclear research center CERN, where such conditions are the norm, was founded in 1954 and is also headquartered in Geneva.

The strength of magnetic fields is measured in gauss, named after the mathematician Carl Friedrich Gauss. Rolex built the first Milgauss to withstand 1,000 gauss, hence the watch's name. Production of the model stopped in 1988 but began again in 2007.

The Dangerous Effects of Magnetism on Movements

Magnetic fields pose a serious danger to a watch's accuracy, with the balance spring being especially susceptible to deviation. These risks aren't limited to certain work environments, either; even everyday use can cause deviations. The German watch manufacturer Sinn tested around 1,000 of their watches and determined that almost 60% were magnetized. Half of them had serious errors due to the magnetic fields. Everyday items, such as speakers and garage door closers, contain strong magnets and could cause these issues. The same applies to electric motors, which is why locomotives and trams can also cause this problem.

Amagnetic Components within the Movement

One of the most important anti-magnetic measures Rolex has taken in the modern Milgauss models is the Parachrom balance spring. The manufacturer introduced this component in 2005 after a five-year development period. The blue spiral is made of a zirconium-niobium alloy with an oxidized layer; this material is not influenced by magnetic fields.

The inner metal case is another defense against magnetism. It fully surrounds and protects the movement following the principles of a Faraday cage. This cage is made of a special alloy that Rolex has yet to reveal. Other manufacturers use soft iron. The Milgauss' anti-magnetic inner case consists of two parts, which the watchmaker screws together after placing the movement within. There are openings only for the hands and the crown.

According to international standard ISO 764, a non-magnetic watch may only deviate by +/- 30 seconds per day after being exposed to a magnetic field of 60 gauss. With resistance up to 1,000 gauss, Rolex's watch easily fulfills this requirement. The watch is also far more accurate than required by the ISO standard, as it only deviates by +/- 2 seconds a day. Thanks to its incredible accuracy, the Milgauss also earned certification from the Official Swiss Chronometer Testing Institute (COSC).